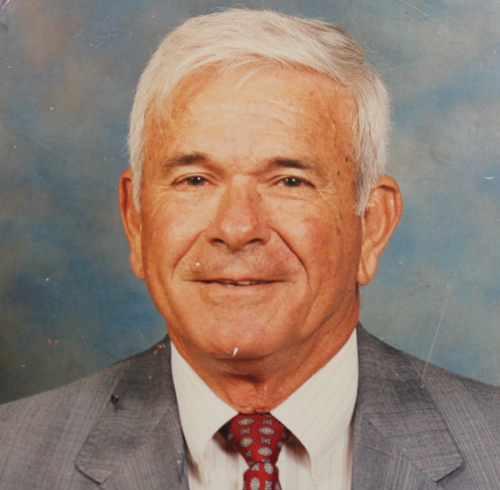 My father, Frank Manuppelli, was a diligent civic leader and an impeccable father. HemisFair 1968 was one of his noted accomplishments. Born and raised in San Antonio, he was a gift to our beautiful city and a gem of a Dad. I planted this tree, a Burr Oak, in HemisFair Park in his honor.

“Among the hundreds of busy people at HemisFair, none is moving faster than Frank Manupelli [Yes he spelled our last name with one ‘p’ to minimize complication].

The Fair’s Executive Vice President is like a commander in the field, making decisions on the spot, bulldozing the daily crises and hammering away at emergencies that arise as regularly as the sun comes up.

Manupelli is the stabilizing force of HemisFair. He remains reasonably calm and invariably good natured in the whirlpool of people, equipment, trucks, dignitaries, and exhibitors.

A Lesser Man would tear his hair and lash out at his subordinates but not this administrator. His workday, with social obligations, often runs 18 to 20 hours, and the pace has quickened in recent weeks. Fortunately for the Fair, Manupelli is never too busy to cooperate with the many people trying to get HemisFair off to a successful start.

For nearly 5 years, HemisFair has been his life, and his energies have been directed toward April 6, 1968. With that day near at hand, the end of the long, long road is in sight for the administrator. It is the finishing point for him; the starting line for multitudes of Fair goers.

WHAT HAPPENS after the Saturday opening? What does the Executive Vice President have in mind for thrills when the construction turmoil is supplanted by gaiety and pleasure-seeking. crowds? Except for an anticipated load of housekeeping problems, Manupelli hasn’t the fairest notion about life beyond April 6.

To be sure, it will be a world different from the one which he has been living, but he has made no time in which to think about it.”